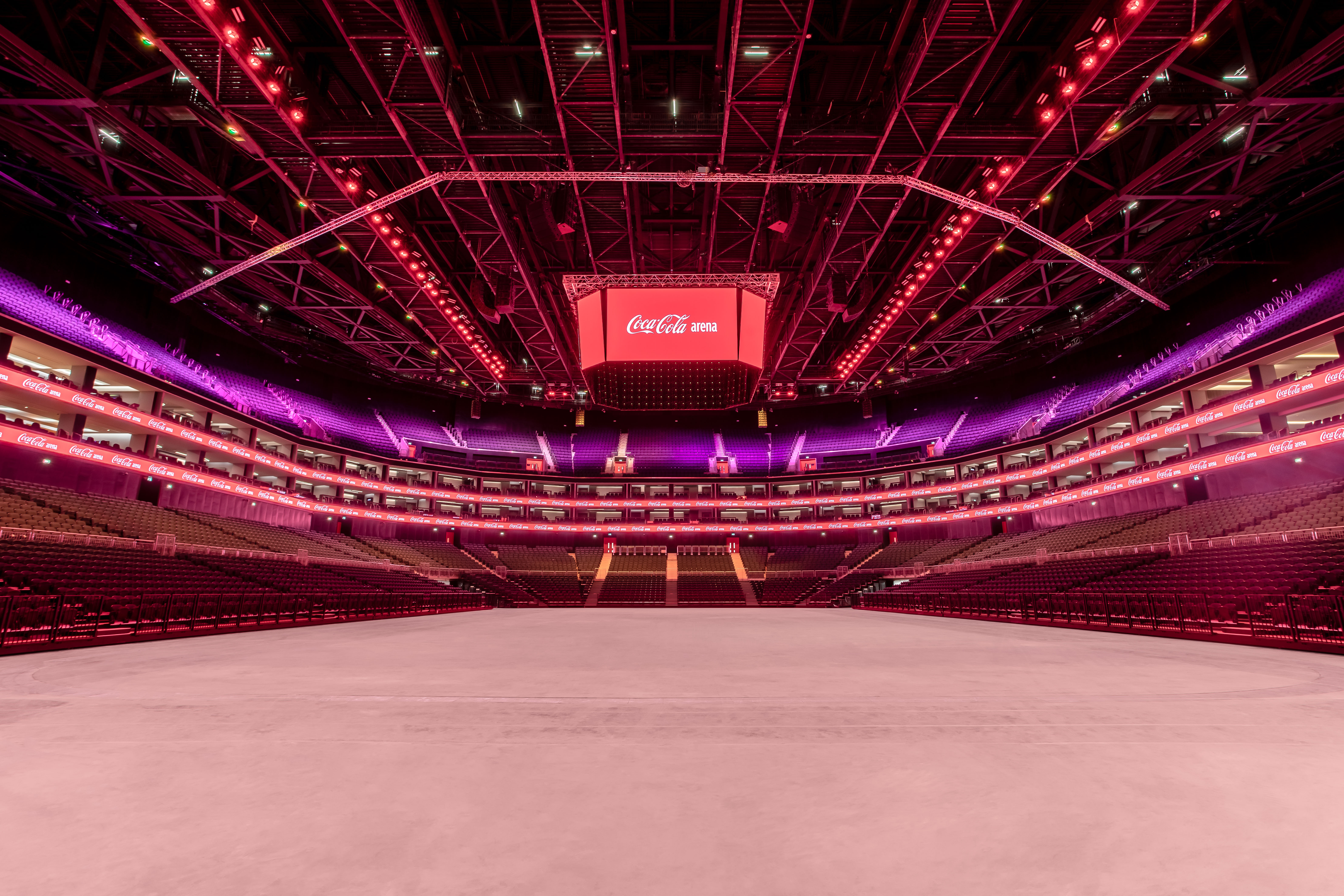 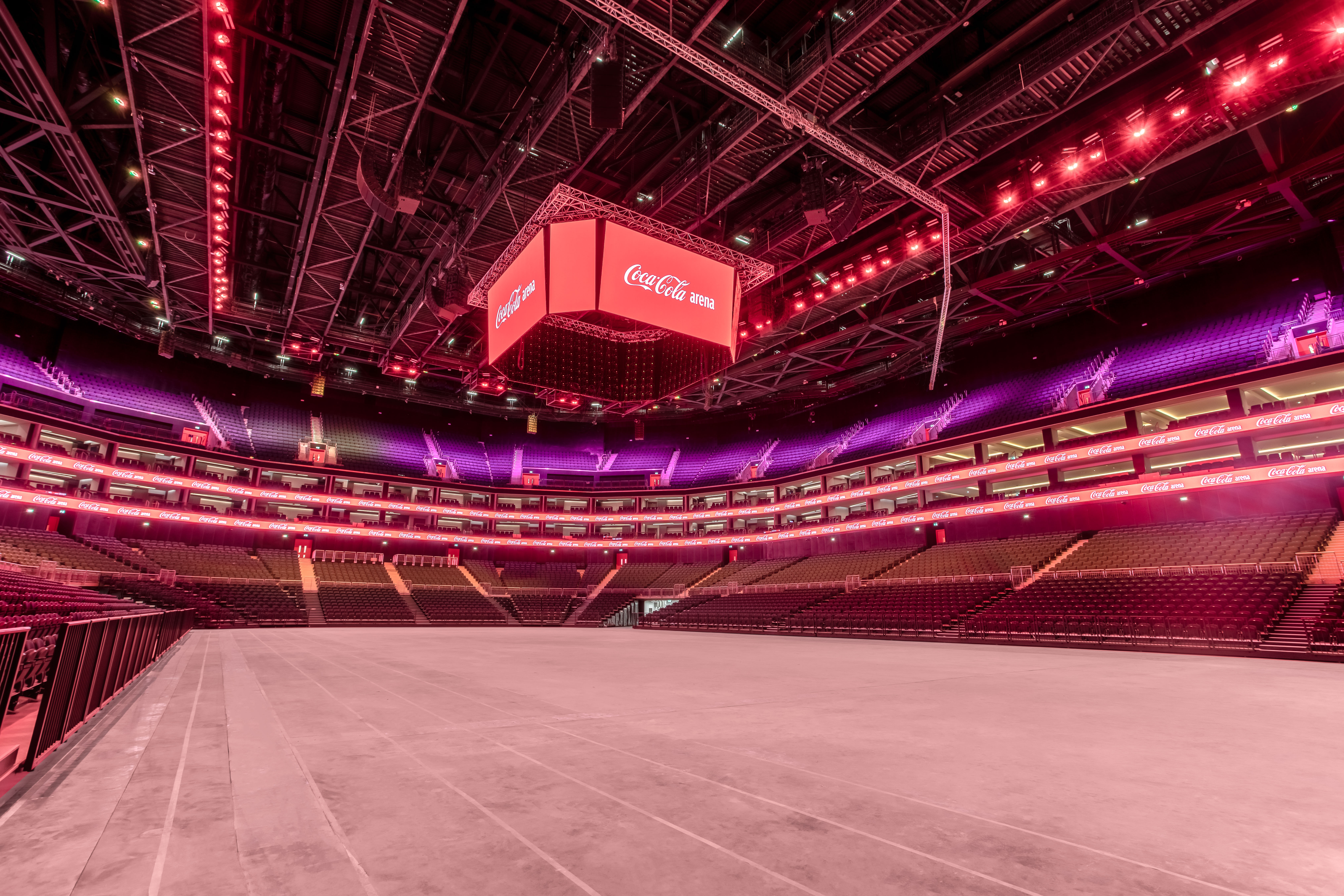 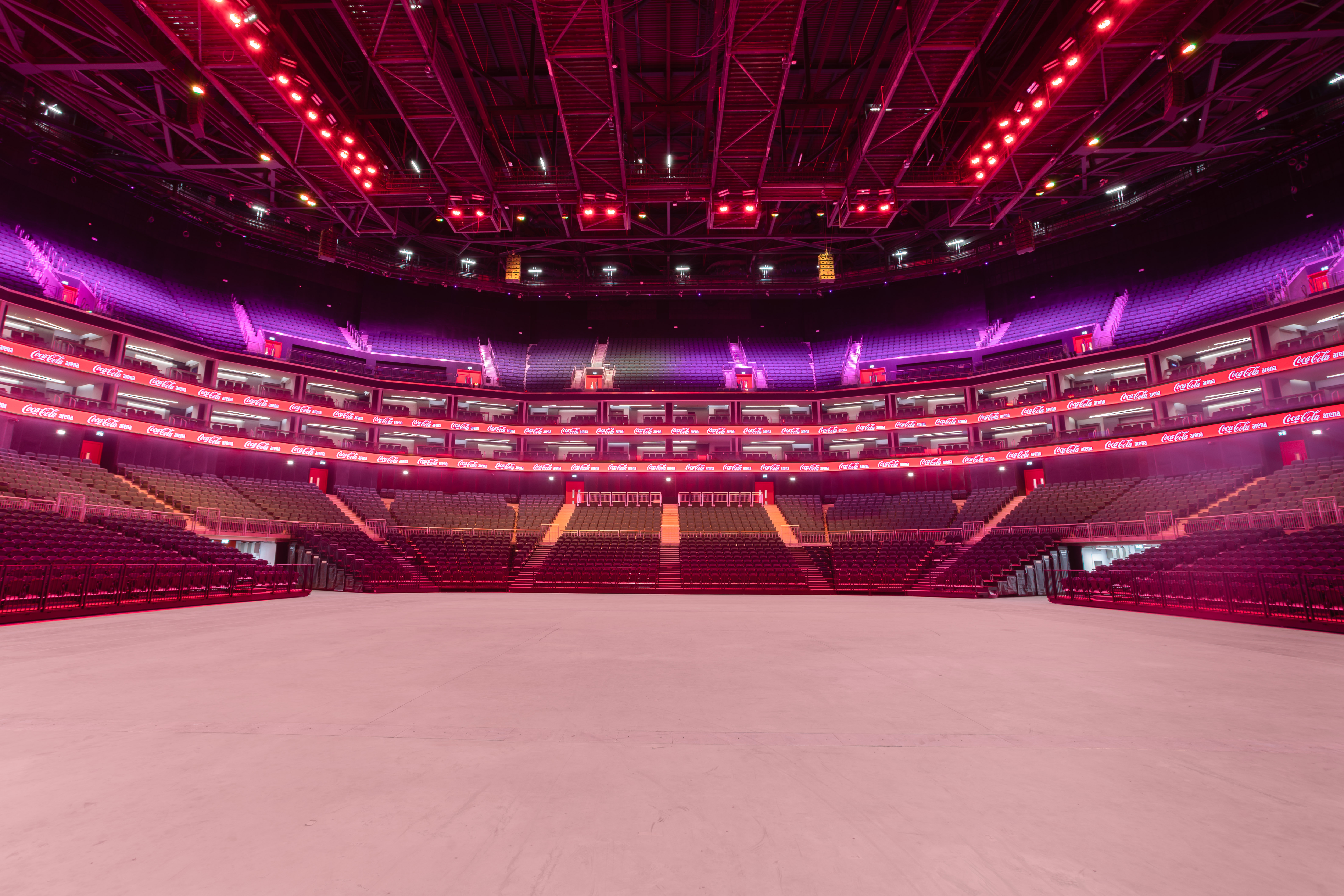 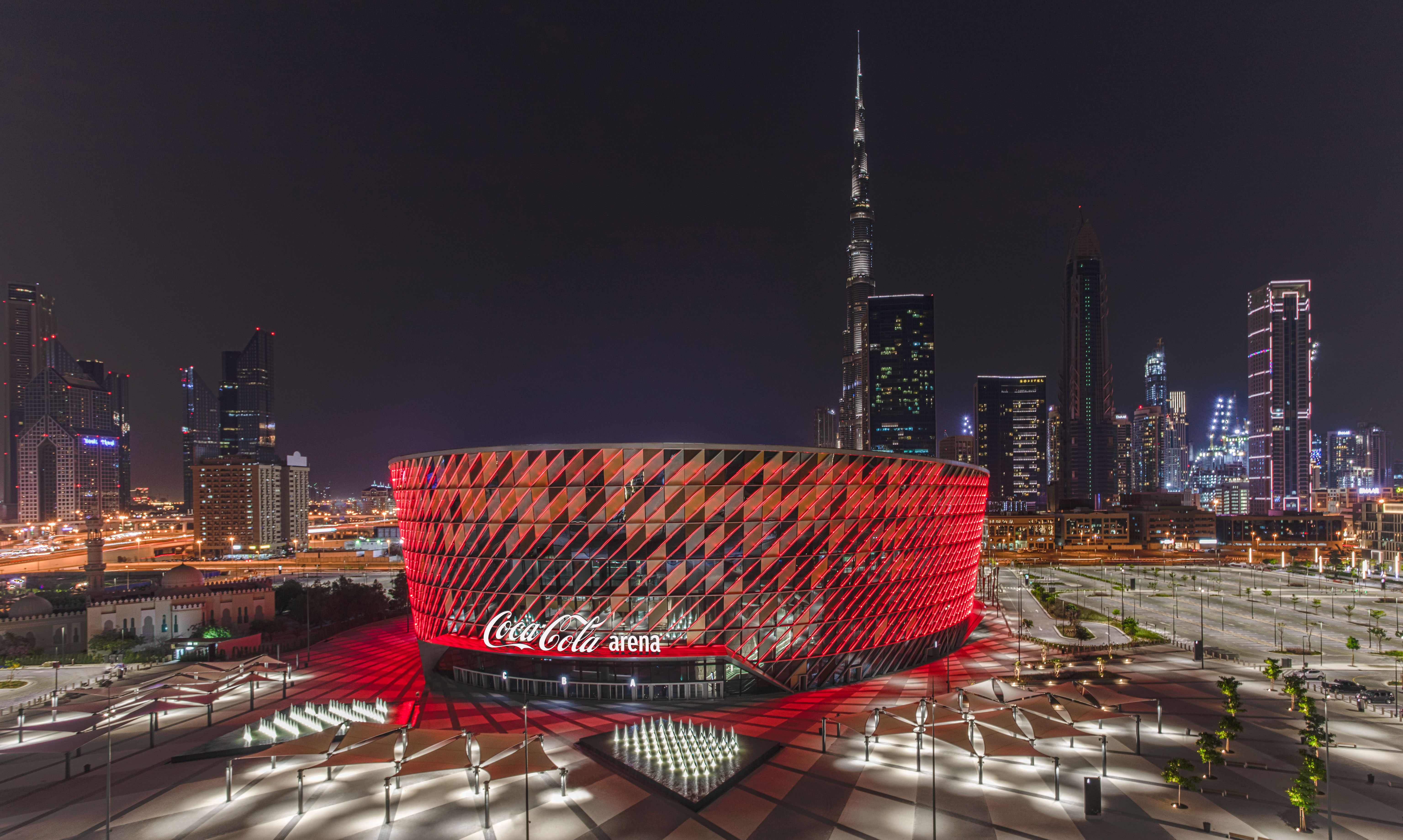 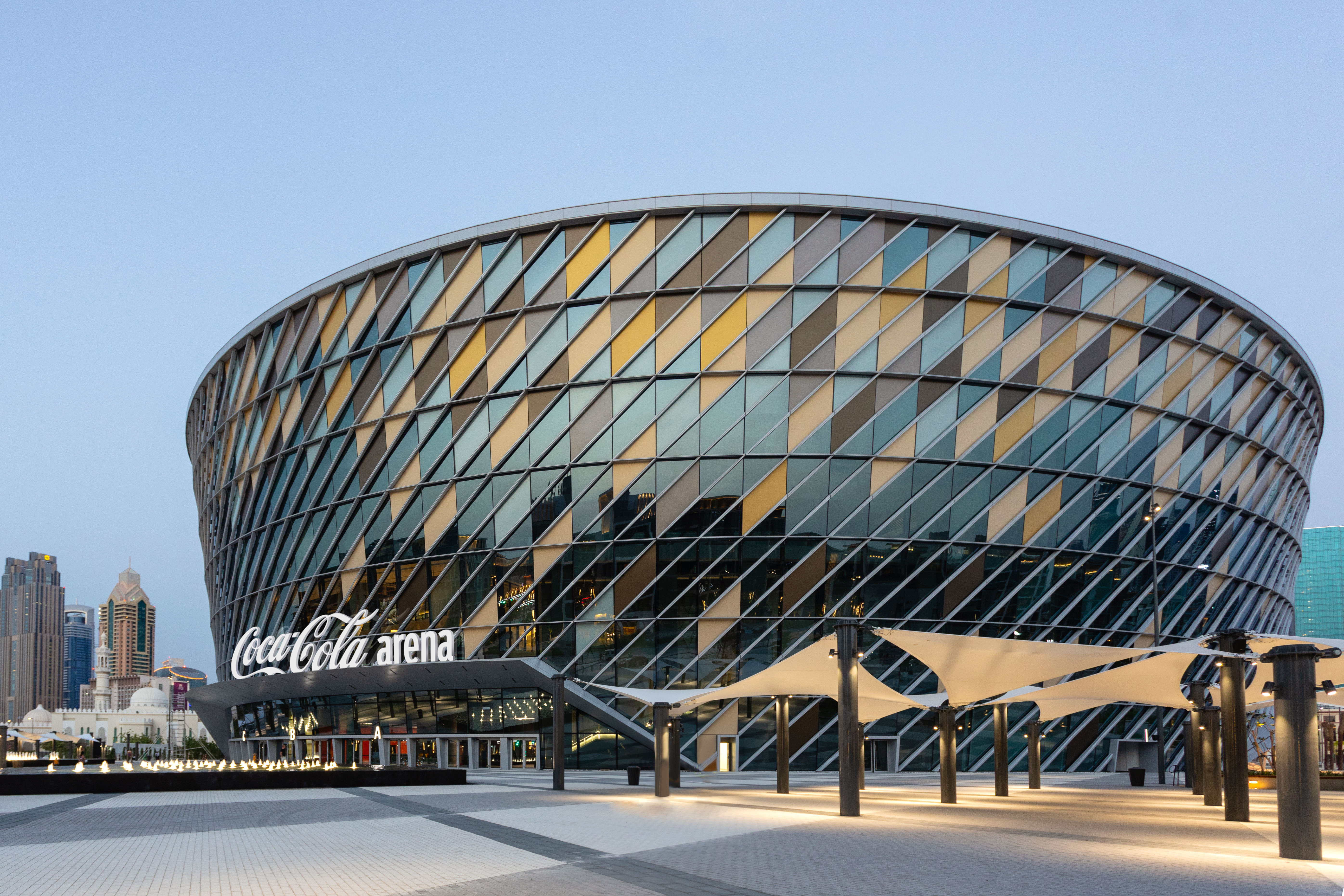 J&C Joel was contracted by Al Shafar General Contracting to provide Drapery Solutions and Rigging Systems to the impressive, new Coca-Cola Arena, located at City Walk in Dubai – a popular urban retail and residential destination owned by the diversified Dubai-based holding company Meraas
Coca-Cola Arena is the region’s first and largest indoor multi-purpose arena and with a span of over 500,000 square feet, the arena can accommodate a capacity of 17,000 people!

For this project, J&C Joel provided perimeter masking drapes which comprised of their bespoke vertical retraction units – The Apollo Festoon System. Each Festoon System consisted of a double braked motor gearbox, drive shafts, bearings and pulleys, which were mounted within custom 0.4m Box Truss. The systems had working travels of 11.5m and evenly spaced pick-up lines that terminated to a bar sewn into a pocket at the base of the drapes. In addition, each Festoon System had an independent control system operating a fixed speed of 0.2m/s.

Hung from each Festoon System was J&C Joel’s black IFR Premier Wool Serge (WS090) drapes, these were sewn flat and headed with Ties for a secure attachment. On the rear face of the drapes, “D” rings were sewn in line with the drop lines to guide them through. J&C Joel also provided a dividing Drapery System to the arena. To achieve this, a series of demountable Truss Systems were suspended from 250kg D8+ Chain Hoists, from which, Premier Wool Serge (WS090) drapes were hung. These drapes could be moved to create different configurations around the arena, ensuring the system successfully met the multi-purpose requirements of the venue.

Next, J&C Joel supplied a further 28 Chain Hoists to suspend speaker stacks in the arena. Each of the Chain Hoists supplied had dual brakes, geared limits (in accordance with the BGV D8+ standard), a working travel of 25m and a varied safe working load (SWL) from 250kg to 2000kg.

For another part of the project, J&C Joel installed twelve 1000Kg BGV D8+ Chain Hoists to suspend the arena’s octagon-shaped scoreboard, which linked back to a separate control rack.

Finally, J&C Joel installed five Projection Screens at the front of the arena measuring 12m drop x 7m wide. The screens had a square hollow section frame which was infilled with Acoustic Rockwool and wrapped in Acoustic Transparent fabric (ACT001), to ensure that the screens met the arena’s NCR1 acoustic requirement. J&C Joel then manufactured the face fabric for the screens from their white Non-Perforated PVC Projection Screen (PVC045) due to the fabric’s ability to create a clear, high-quality image when projected onto.

Commenting on the project, Ben Richardson-Owen J&C Joel’s Head of International Projects said “The project was a substantial and challenging job which took around a year to complete. I would like to thank the main contractor Al Shafar General Contracting and consultant DAR for their support throughout the project. I believe the fantastic outcome of the project represents the hard work and dedication from the J&C Joel Team and all of those involved in the project.”