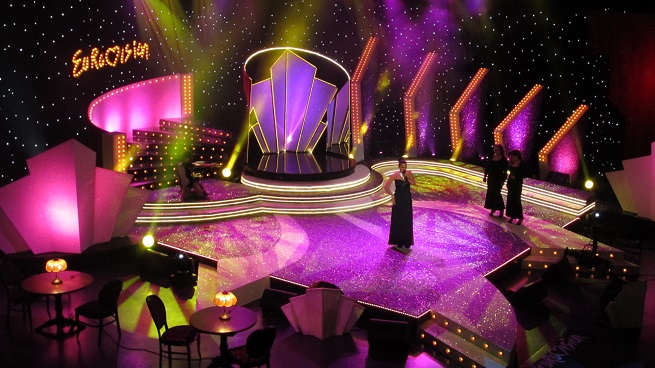 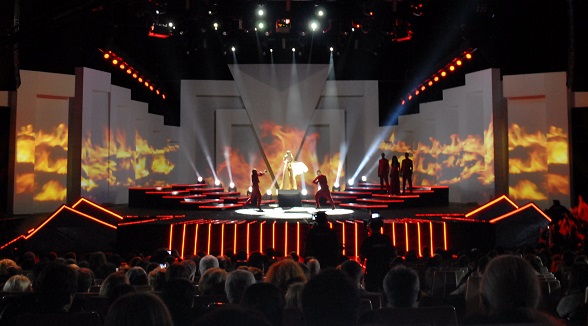 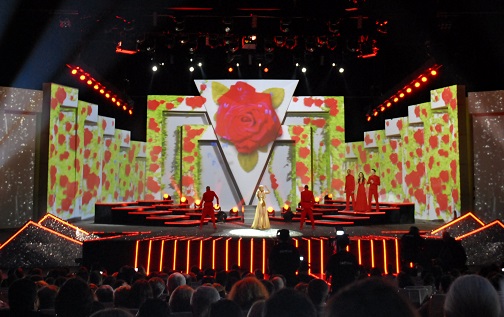 Fabrics supplied by J&C Joel were in the spotlight at the 2012 Bulgarian National Eurovision Semi-Finals and Final.

The Eurovision Song contest is the world’s most watched non-sporting event and regularly attracts television audiences in excess of 100 million people.

Many of the 42 artists competing for the 2012 Eurovision title were selected through televised public votes and the Bulgarian entry, Sofi Marinova, won her place in the international TV song competition on a stage dressed by TV set and stage designers Tri K-TV with event fabrics supplied by J&C Joel.

The Bulgarian National Eurovision Final was staged within Hall One of the National Palace of Culture in Sofia.

All of the upright structures on the stage were clad in white Scenic and Artist Canvas (CAN003), and a 13 metre wide seamless white Trevira Cyclorama Canvas (CAN043) was installed to the rear of the stage.

A total of 100 metres of gun metal Glitter Cloth (GLI019) was used to dress various structures on the stage. J&C Joel’s white (GLI009) and gun metal (GLI019) Glitter Cloth was also used to dress the set of the televised Bulgarian Eurovision semi-final, which took place in the Bulgarian National Television Centre in Sofia. Plum Velvet Velour (VEL003) curtains were also hung at the edges of the set.